SALT LAKE CITY — A Salt Lake County appeals board this week ruled against releasing body-camera footage of the police shooting of a 17-year-old boy, but the American Civil Liberties Union said it would appeal that decision again.

The footage, from Feb. 27, is believed to show two Salt Lake police officers shooting Abdi Mohamed near The Road Home on Rio Grande Street. Police said two officers shot Mohamed because he was attacking a man with an aluminum mop handle and disregarded multiple commands to stop and drop the object.

The Salt Lake County District Attorney’s Office concluded in August that the shooting was justified. The office has so far declined to release body-camera footage from the incident, saying it may interfere with the ongoing case against Mohamed.

Mohamed is charged in juvenile court with aggravated robbery, a first-degree felony, and drug possession with intent to distribute, a second-degree felony, in connection with the incident.

Mohamed was seriously injured in the shooting and used a wheelchair to get around when he attended a hearing in his case in August. According to the ACLU, he continues to be wheelchair-bound.

Salt Lake City’s Police Civilian Review Board determined in September that the shooting was not within the policies of the Salt Lake City Police Department.

The ACLU has filed a Government Records Access and Management Act request for footage from the shooting, saying it is in the interest of transparency from police. The organization promised to appeal the board’s ruling that upheld prosecutors’ decision not to release the footage. 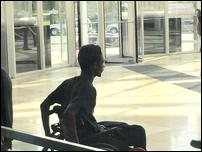 A man shot by two Salt Lake police officers after allegedly robbing and beating another man made his initial appearance in juvenile court Wednesday.

“The public has a right to know what happened in a critical incident like this one,” Leah Farrell, an ACLU attorney, said in a statement Wednesday. “The important transparency function of law enforcement body cameras is undermined when government officials withhold footage in the face of overwhelming public interest.”

The Salt Lake County GRAMA Appeals Board said in its ruling that its decision to uphold prosecutors’ open records denials was a “very close call.”

“In the end, the board is persuaded by the county’s argument that the constitutional, statutory and rule-based rights of the juvenile in this matter outweigh the right of the public in assuring transparency and accountability of its public officials at this time,” the board said.