(CNN)A Baltimore school tutor has been fired and charged with multiple counts of felony child abuse after a student in his care was left with a fractured jaw and two missing teeth.

Trayvon Grayson’s mother says the 7-year-old suffered the injuries when the tutor threw him against a wall for acting unruly.
“I looked in the ambulance and there’s my son, his face big, mouth bloody. I turned to the man, ‘I said, ‘This isn’t regular restraint,” Lateekqua Jackson told CNN affiiliate WBFF.
The incident happened at the City Springs Elementary School.
The tutor, 25-year-old Timothy Randall Korr, was an employee of the Baltimore Curriculum Project, which operates a network of charter schools around the city. He told police that he removed Trayvon from his class for misbehaving.
Korr said he then lost his footing and the boy “hit himself” on the wall, according to the affiliate. 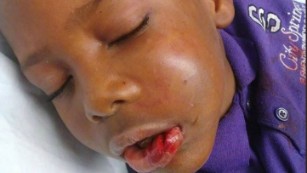 Trayvon Grayson, 7, after the incident.
But Trayvon’s mother doesn’t buy that explanation.
“He can’t throw himself into the wall and fracture his jaw and lose his teeth,” she said. “He’s only 7 years old. He’s so small he’s not going to do the damage to himself.”
Baltimore City Police detectives investigating the incident examined the boy at the hospital and determined he was suffering from major trauma to his head. And after looking at a video of the incident provided by the school, they concluded the tutor had committed a crime.
Korr was charged with first- and second-degree child abuse, first- and second-degree assault, reckless endangerment and neglect of a minor.
He did not immediately respond to a request from CNN for comment. It was not clear Wednesday afternoon whether Korr had retained an attorney.
Larry Schugam, executive vice president of the Baltimore Curriculum Project, said the incident made him “heartsick.”
“This is an unusual, isolated incident for our schools, and we are participating in a thorough investigation into what exactly happened,” Schugam told CNN. The employment of the one employee involved has been terminated.”
Anne Fullerton, spokeswoman for Baltimore City Public Schools, told CNN the school district also is working with police and “will take any action warranted once the investigation is complete.
credit CNN